“Well what a fab year we had! I would never have dreamed that I would achieve soooooo much in just 1 year. Mac and myself started the season in 2015 with a Novice and very quickly moved through to Intermediate level.

We did our first ever FEI competition at Brand Hall and came 5th overall. We were also talent spotted and asked to be part of the BEF Development Squad to compete at another FEI CCI* at MillStreet International in Ireland!

I was absolutely over the moon and, of course, accepted. After the first day of dressage in Ireland we were in the lead, and by the end of the 3 days competition, we came a very respectful 8th place.

After this amazing opportunity we were then concentrating on the CCIJ* Championships to be held at Weston Park in the October. Again we did amazingly well finishing in the top 10% of starters. I am so grateful to my sponsors Blue Chip for looking after the nutritional needs of my horse Fleetwood Mac V, and keeping him in tip-top condition.

I feel very proud to be a brand Ambassador for Blue Chip and in 2016 I will be trialling for GB Junior Squad. I will be giving it my very best shot this year, but I am young enough to trial next year too. I will also be aiming to compete my first CCI** this year, as well as traveling abroad to compete again.

My first competition of the season is only a few days away now, being Isleham in Cambridgeshire.  Here’s to an amazing Eventing season and a successful year ahead for Blue Chip and myself working together again.

“Dryfesdale Dalmhor has got off to a fabulous start. We took him to his first show he was 2nd in the Yearling and won M&M. Not bad for a pony that has only been here 3 weeks. He behaved very well. Just to let you know Dalmhor made his debut last week and got a first and second. We’re very pleased”

“Natasha and Sweet Caledonia (Cally) will be travelling to Waregem as practice ahead of their trip to Rio, part of the Paralympic Inspiration Programme.”

“Corky (Coronach De Santana) competed in the BRC Intermediate Dressage Qualifier last weekend at Rockrose Equestrian scoring a PB of 70% in our prelim level test which is a great boost before the start of our event season.

I’ve attached a couple of photos showing him off in his new Blue Chip dressage square looking super healthy and shiny 6 weeks into starting Daily Health balancer and Joint RLF.

We have also been out XC schooling at Hendersyde Park (again photo attached) and competed in our first hunter trial of the year at Dun’s Castle coming 5th out of a huge field of horses.  Lucas (Luxern) has been out doing some more British Show Jumping at Rockrose Equestrian and Ingilston Country Club picking up 3 DCs (two first places and one fourth placing).”

“Beth is taking Foxy to the Blue Chip Winter Showjumping Championships.  He’s booked in the Pro on Thursday and grand prix on Friday.  She should also be taking Bounce and Stumpy to jump outside.  Za Touche is going but she is being ridden by Katie Vernon.”

“Spring is round the corner now…. I have seen the first lambs of the season which is always a symbol of hope for the warmer months!

We have been busy with competitions this month on some lovely horses…..
Finn was on this afternoon in the PSG…. although I did accidentally get on an hour early… bit keen!

Thank you Bury Farm and everyone who supported a busy day!

Finn followed on day two with a calm test. Although he didn’t get the memo that there were a line of four time changes across the diagonal… not two time changes as he so beautifully demonstrated!! I was really pleased with his progress in the canter pirouettes and most of the more difficult work. He finished 3rd in the Silver PSG and 5th Overall.

I am very grateful to Blue Chip feed for helping me tailor Finn’s diet to his sensative character. We have just started him on the Blue Chip Calming Balancer… watch this space!

At the start of March Todd (owned by Jonathan Chapman), Cooter (owned by Jo Brett) and Affinity Bay had an outing to Bury Farm. 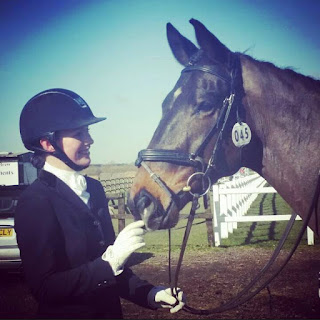 Later the same week Merri and Finn were out competing at Keysoe Under 25 High Profile Show. Merri did a very good PSG test on the first day to finish 4th in the Silver section. There were two big hiccups in the test but the rest of the marks were consistent 7’s and 8’s.

Just Before Keysoe Finn was treated to a physio session from Diane Daynes- He felt amazing all weekend and I am still enjoying the rewards weeks later.

I have been lucky enough to compete Sue Botha’s Dante in his first Medium test. We went to Windmill farm to contest the medium 69. Dante really stepped up to the challenge and scored a green 66% to win the class! He was brilliant in all of the half passes and the canter work was a real highlight.

Breakspeare Riding Club were very lucky to have the brilliant Lisa Sparrowhawk  Performance Coach visit Blackwell’s Cafe in Chipperfield. Lisa discussed many topics and created a great discussion about positive mindset in relation to riding and competing. She highlighted how we all perceive situations and images differently with some great techniques and also how mindset affects us physiologically (with some more hands on examples).

Thank you Lisa for inspiring us all! 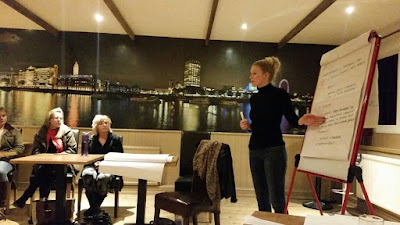 March has been a very busy month (and we are only half way through!).

I have had had the opportunity to ride some great horses ( see Nugget below) and really enjoyed teaching private lessons and clinics/rallies alike.

I am now looking forward to training with Judy Harvey, Ian Woodhead and Stephen Clarke in the coming week. 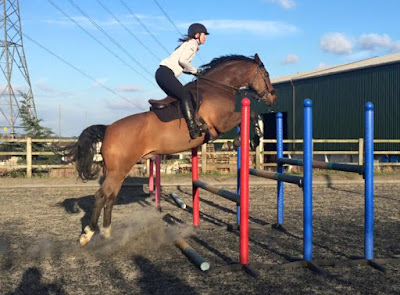 Merri competed at Bury farm in the Inter I test. It was our second ever Inter I together and I was over the moon with Merri’s performance. She produced a harmonious test with highlights in her trot half pass and temp changes. There were still some parts to work on but it was probably our best test to date. Merri won the class on 68%. 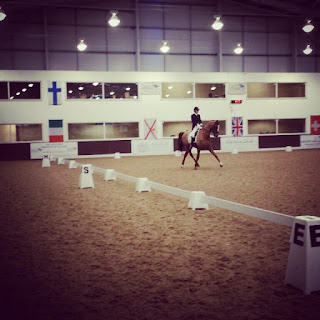 The same day I had a new ride Camiro II owned by Sharon Higgs entered in the Prelim and Novice classes. Aero won the Prelim on 74% and then came 3rd in his fist ever Novice on 67%. He gave me a great ride and there is so much more to come.

Todd recently had a lesson with Ian Woodhead. We were working on simple changes as developing the half halt further. Todd worked really well.

I have also been training with Judy Harvey with Merri and Tilly. Merri was working on half steps and consolidating some canter pirouette work.

Tilly (Galanci RS) a new 5yo owned by Judy Firmston- Williams had a shorter lesson as we are still building her fitness. She was really well behaved and very relaxed.

Affinity Bay was very lucky to have a lesson with Stephen Clarke. He worked brilliantly and Stephen encouraged our progress towards the Inter I tests.

I have been competing Keens Lordez quite consistently over the last month or so and she has obtained her four British novice double clears to qualify for the regionals. She has taken to affiliated jumping well and has jumped five double clears on the ’trot’. She also has the first of her discovery and amateur double clears in only a small number of outings. After moving to us she lost a bit of condition with being stressed and since putting her onto Blue Chip Pro she looks great and is feeling super competitive. We have recently taken her to Michael Potter’s for some training ahead of the summer qualifiers.

Lucy May has enjoyed some time off during the colder months and is back into work. She is feeling very fresh on Pro and Dynamic and very eager to jump! Ursela is also beginning her trotting work so fingers crossed she continues her progression well.