“I’ve been busy preparing for the eventing season and now have my first couple of events booked – Isleham & Oasby, I’m so excited!  I have been busy competing and training out and about; today I’ve been to Moreton Morrell as they were holding the British Riding Club Championship Qualifier and I was placed 1st with 74.58%, which was 5% more than second place!  I’ve already started Mac’s first gallop training as GB Junior trials are very early in the season!”

“February has been a very busy month so far, I have had the pleasure of teaching at both Riding Club and Pony Club Clinics amongst teaching private lessons.
The competitions horses are all fit and healthy. Merri had an easier week after the Addington High Profile Show but we are now training towards the Under 25 High Profile show at Keysoe. Finn has Regional Championships this month. He is competing in the Advanced Medium and Advanced Medium Freestyle at Addington and the PSG Freestyle at Merrist Wood. The classes at Addington are huge in the advanced medium but generally looking like a quieter show compared to previous years! 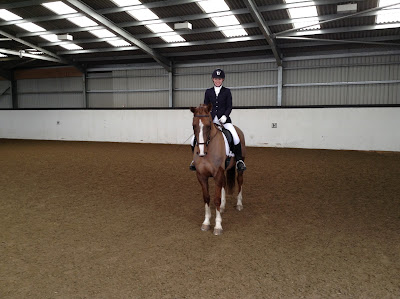 Todd went to his second ever show at Quainton Stud at the start of February. He was super in the warm up, he travelled with another horse and they walked around together to start so that helped give him confidence in the surroundings.
The tests were in much better balance than those that he did at Addington a month ago. Over all I was thrilled with his progress and the judges made some lovely comments. Todd finished on 68 & 71% and won both his classes!

There were gail force winds so trotting down the centre line was quite a challenge….
Riding in high winds is becoming a bit of a theme this February!!”

“January & February have been a busy time with lots of training with BYRDS for B squad and very successful competing. In just two outings Ellie & Robin are qualified for the summer regionals at novice & elementary with top scores in the mid 70’s%. They continue to go from strength to strength and 2016 is looking to be an exciting year. We have a busy time ahead with three very major competitions two at Keysoe – under 25’s high profile show & RC championships, and Bedfordshire for the Under 25’s championships.”

“We had a very good start to the season last year with a win in a CIC2* at Barroca Portugal and an Advanced win at Belton with Miss Caruso. Chap got a super result at Chatsworth CIC3* with an 8th place.   That then ended our run of good form internationally and for the rest of the season we seem to not quite hit the same heights, Eisfee and Miss Caruso both picked up Injuries so that ended their seasons.

I have quite a few younger horses coming through so spent a lot of the 2nd half of the season doing BE100’s and Novices; ones to hopefully watch will be Ferro Point and Dunges Don Perignon – they will be aimed at Camphire 6yr old CIC1*.

I will have 5 horses all at 2* level to start the season – Mocklershill Buster who will probably just do 2* all year; Eisfee who will aim for Blenhim 8,9 year old class; Billy Pastime who will also be aiming for a later CIC3* are 3 to keep an eye on.  Then I have Chap who will be straight out at 3* level going to Burnham Market and Belton to qualify him for Samur CCI3*.”

“I had an amazing season in 2015. I qualified for the Picton final with Banks Timber and he went on and won his section at the NPS finals.  Fly the Last Flute was 2nd at HOYS, and Banks Timber was best of breed at Olympia and finished 8th overall – it was his first season under saddle.

My goals for 2016 are to qualify for HOYS and Olympia. We have some novices to bring out, one of them is an own-bred fell pony out of Townend Echo who was a HOYS finalist.”

“Another lovely soggy day in the Cotswolds this morning. I thought I would send you an update ahead of reconsidering my training options for the day!  I’m in the process of finalising the Crabbet Organisation endurance awards ahead of next Saturday. I’ve attracted 50 people from across the country which is fantastic and 15 more horses applied compared to the pilot last year.

Thank you all for your support.  Then next Sunday Choral Bey is due to compete in his second novice endurance ride in the Forest of Dean. On 20th March we hope Sol will complete his third novice ride at Wadebridge accompanied by Silver Zenif then upgrade to open level.

The two horses can then train for open 64km together in the early summer.  We heard from one of the mare owners in Australia who purchased silver zenif’s frozen semen last year that her young Arab mare has been scanned 15 days in foal which is fantastic news!

Fingers and hooves crossed that the mare holds as it will be our first Southern Hemisphere foal. Both mum and I will be attending the Breeding for Gold conference at the University of Cirencester on 8th March hosted by West Kington Stud and the BEF.

We have three mares ourselves to put in foal this year two to R Ali Bey and one to Silver Zenif.  You may be wondering what has happened to Maarhabi (Charlie) and Prince Meliodas (Mel)? Charlie has been on field rest on holiday in Cornwall following a suspensory ligament issue which I wanted to give the best opportunity of healing itself at my parents farm. He will be brought back into work once the ground dries out.

Mel now 18 is fine, herd manager! We had to replace our trailer due to old age and he then wouldn’t load so we decided with our new young family and two younger horses Sol & Zenif who would load we would use Mel as a pace setter at home and invest time in the youngsters rather than stress about getting Mel to/from competitions!

My parents have recently bought another ifor Williams trailer so we can now borrow it and remove the central partition to take Mel out later this year. He’s a been there done that horse as you know so this year is Sol and Zenif’s chance to shine (we hope) and focus on getting then 80km fit and up to advanced!  Thank you all again for your support ahead of next week’s award ceremony and I will let you know how Sol (Choral Bey) performs.

I’m glad it’s a slow 32km because of the dreadful weather impacting training but if we can use competition fitness to leapfrog to the next one it should set us all up for 2016!”

“We have had a quiet couple of months with me finishing my third year exams.  Ursela has returned back from rehabilitation and is now in ridden work which is really exciting!  I have a new ride called Keens Lordez owned by Emma Harris and we took her to her 2nd show yesterday and she jumped a great double-clear in the British Novice and a similar double-clear in the 1m and qualified for Scope.

Unfortunately, we did not manage to attend any Blue Chip Qualifiers which is disappointing as it is my favourite show of the year!”

“In 2015 I made the big step up to PSG/ Young Riders with my horse Donny.  I have had great success on the way winning Addington High Profile Young Rider team test, being selected for my first Young Rider international and being placed in the top 10 and winning a regional at PSG being my greatest achievement so far.

Donny and I also won the advanced medium open regional early in the year and we went on to being placed 5th at the nationals. Our nationals placing meant we got invited to perform at Royal Windsor Horse Show.

My aim this year for Donny and I is to improve at PSG, move up to inter 1 and work towards the Grand Prix work at home.  2015 had many firsts; I also competed Sunny in his first regional championship where we won the Elementary freestyle and second in the Elementary Open. We then went on to win the freestyle championship, another one of my greatest achievements, and we were 3rd in the elementary open at the nationals.

Sunny also made the step up to medium level; at Sheepgate under 25’s championships we won the medium championship building on our results from 2014 where we won the novice and elementary championship. My aim for 2016 is to move up to advanced medium and work towards PSG at home.”